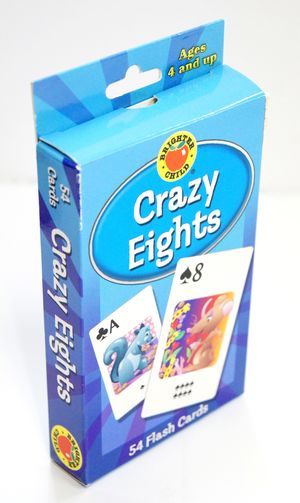 Goal: to discard all cards

Set-up: In a two-player game, the teacher deals each player seven cards. With three or four players, each player is dealt five cards. The remaining cards are placed face down in the center of the table to form a draw pile. The top card is turned face up to start the discard pile.

The player to the left of the dealer goes first and adds to the discard pile by playing one card that matches the top card on the discard pile either by suit or by rank (i.e. 6, jack, ace, etc.). (Teacher can encourage students to say “Ace of Hearts, Four of Spades, Three of Clubs”, etc., as they put their cards down.)

All eights are wild and can be played on any card during a player's turn. When a player discards an eight, he chooses which suit is now in play and says so, for example, “Ten of Diamonds”. The next player must play either a card of that suit or another eight.

The first player to discard all of his cards wins.

Use the most popular and safe payment methods